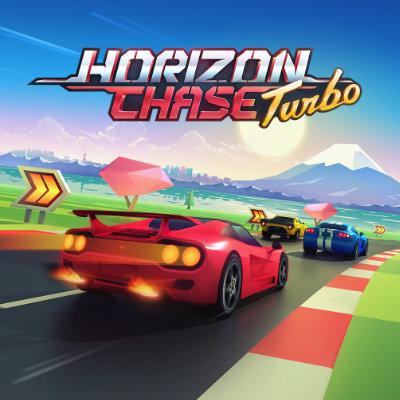 Been dreaming of reliving the crazy races of Top Gear, Outrun, or even Lotus Turbo Challenge, but with modern-day graphics? Well, your dream has just come true! This is the perfect racing game for thrill seekers aged 7 to 99, with no need to master complicated controls. It’s pure, uncomplicated fun right from the outset!

We like a challenge here at Blacknut, but that doesn’t mean we don’t also appreciate the simpler gaming pleasures, like real arcade racers you can play with just four buttons and start having fun from the get-go. This is why we are proud to present our latest arcade crush: Horizon Chase Turbo, a game from Brazilian studio Aquiris that has proven to be a worldwide hit.

It’s a tribute to the arcade racers of yore. There’s no lengthy tutorial, no punishment for the slightest error, and no realistic driving. It’s all about having fun and racing full-throttle while avoiding the competitors (who are often very good!) that have an annoying tendency of trying to stop you overtaking. 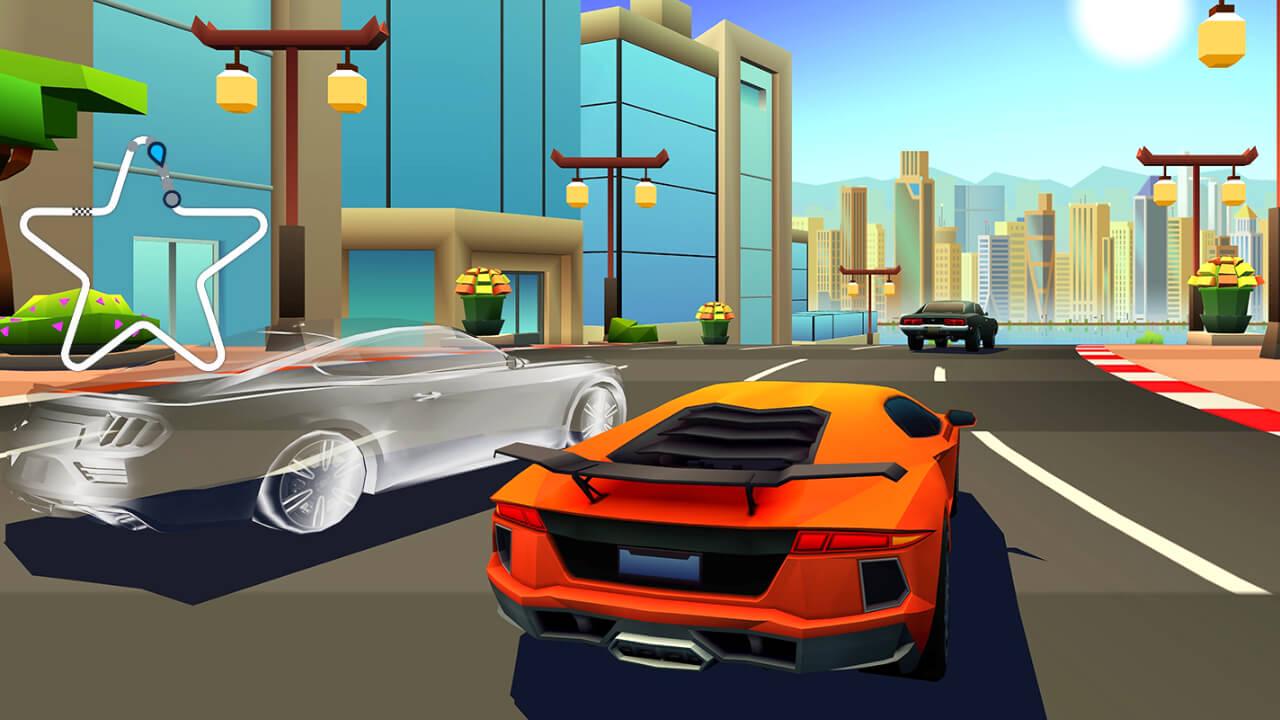 It’s almost impossible to go careening off the track, and it will only take you a few minutes to master your racing lines and get the best out of the corners and overtaking manoeuvres. There’s always the risk of crashing into the scenery, which will send your car spinning out of control for a few precious seconds (just like in the good old days). Because in these races that are often very, very fast (you’ll sometimes complete three laps in less than two minutes), you’ll need to be a real speed demon to be in with a chance of a podium finish. Every second counts!

It’s super-easy to pick up and play.

When it comes to the controls, you can do everything with just four buttons. There’s the accelerator, turbo boost, and the left and right directional buttons. You don’t even need a controller! You can start playing right away with a keyboard and its directional arrows!

But don’t be fooled into thinking the game is a walk in the park, there are also a few little tricks to learn, and some tracks are as tough as they come, so there’s plenty of fun to be had for gamers of all ages and abilities. 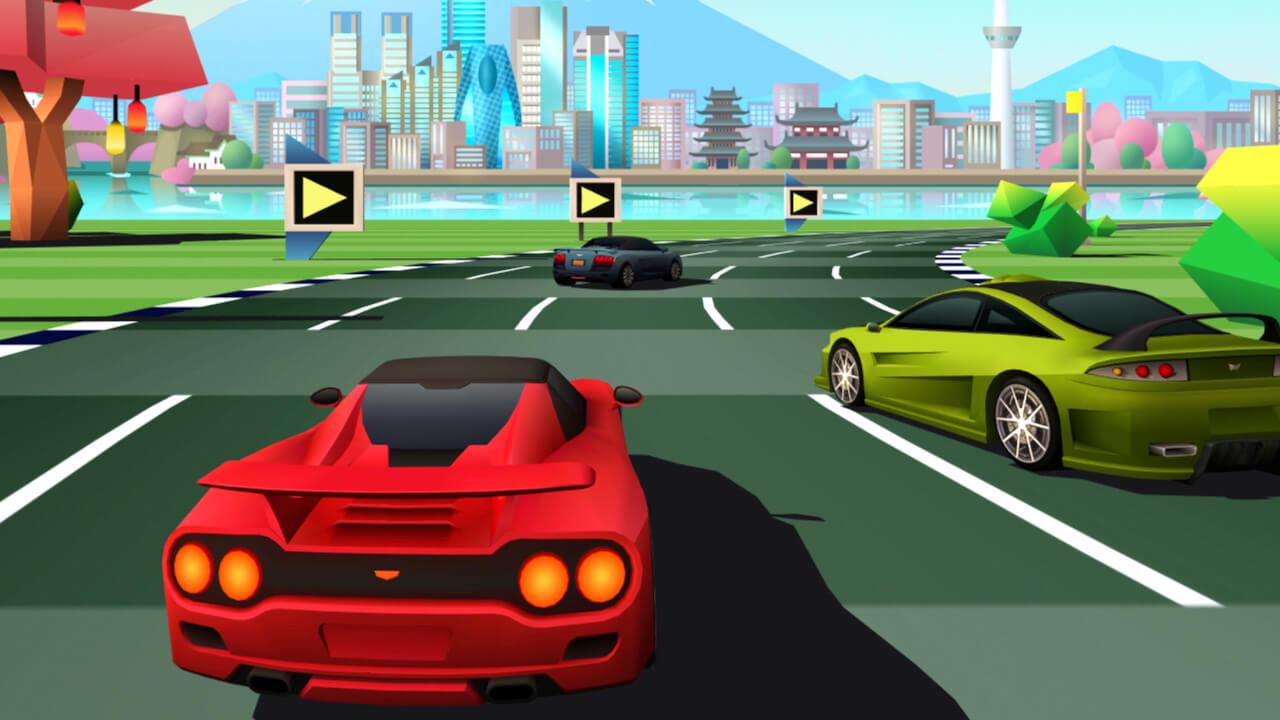 Just make sure you remember to pick up the petrol cans so that you never run out of fuel! And we’ll make no secret of it: some of them are very hard to reach. Fortunately, over the course of the game you’ll unlock loads of cars with different stats: top speed, acceleration, handling, turbo, and fuel, which will mean you don’t have to fill up quite as often. Turbo should be kept to overtake the three cars at the head of the pack (that’s our secret tip for you, there).

The cars here aren’t branded (even if you will immediately recognise the inspiration for the different models) and the tracks aren’t realistic in the least. Some cars don’t even have drivers. But you’re only here to get your speed on in single player or split-screen multiplayer for a night on the sofa with your pals. 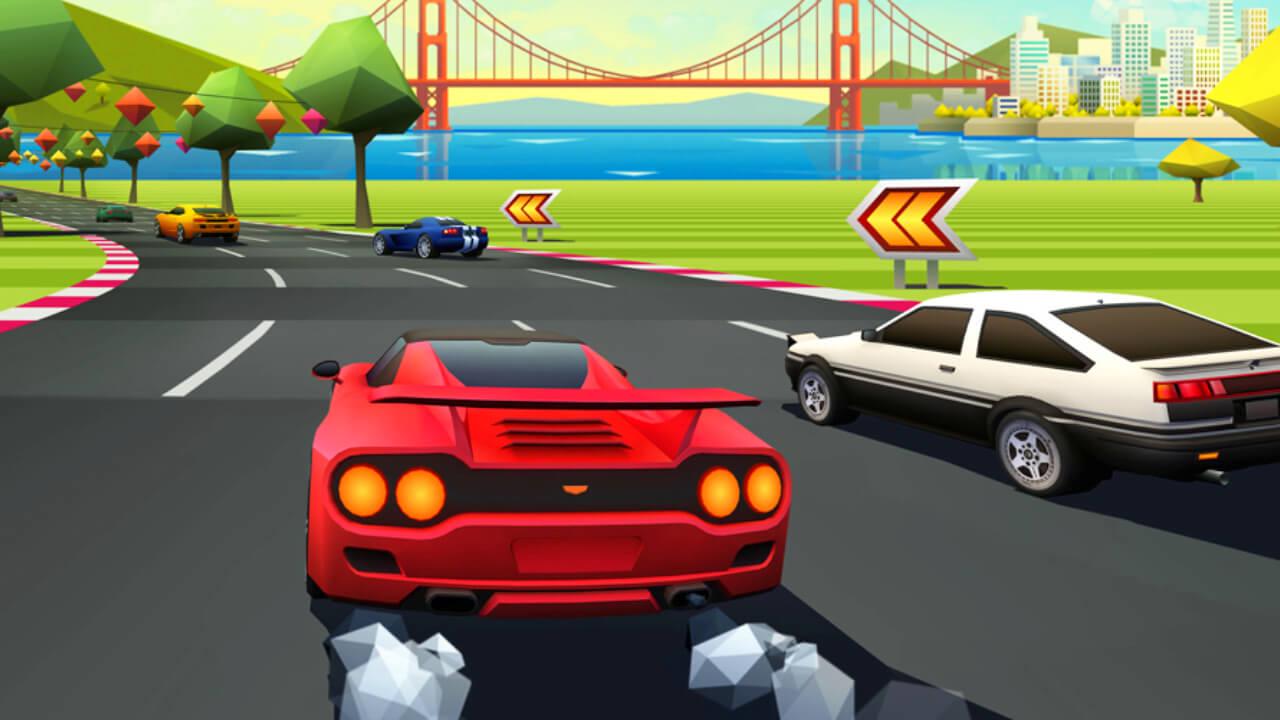 And to top it all off, the soundtrack delivers a pure nostalgia hit. It’s composed by Barry Leitch, the musician behind the soundtracks for many of the classic arcade racers, like Lotus Turbo Challenge, Top Gear, and Rush. Horizon Chase Turbo really does have it all!

And if that’s left you hungry for more, Horizon Chase Turbo also has plenty to satisfy the more hardcore gamer in search of a challenge. You can repeat each race to earn even more money to spend on new cars or engine parts, and as unabashedly arcadey as it may be, Horizon Chase Turbo will nevertheless force you to adapt your driving style to each track. This makes it worthwhile to compete again on completed tracks, upgrading a bronze medal to a gold one, collecting a few more items, or attempting to pull off a difficult manoeuvre and be rewarded with a collector’s car. And there are plenty of neat surprises in store, there.

In short, it’s the essential racing game for hardcore and casual gamers of any age, and, in its own way, a must-have for your collection!